Microbusiness: Why I Love Being a Capitalist-Pig-Dog - June 14th 2013

"This used to be a Funhouse, but now it's full of evil clowns."
Funhouse by Pink

When I was a young person, I believed that big government could solve any and all problems. I believed that I would find my place in "the system" and spend my working days toiling for the glory and betterment of "the system". Being a socialist, business was evil. Starting my own business would have never crossed my mind. That would have been a downright impure thought!

But reality intervened in my constructed view of the world. When I came out of high school, I wanted to go to university and get a science degree. It seemed like a good plan. My parents supported the plan too. They deeply believed that a good education would precede a good career.

Unfortunately, things didn't work out as planned. I wasn't much of a scholar and I didn't last long in university. I tried breaking into the workforce during a recession and ended up tree-planting for the summer. That winter, while I was on Unemployment Insurance, I stacked up a large pile of rejected resumes. It seemed that not having a good education put me at the bottom of the pile. My parent's belief that having a good education preceded a good career was proving true.

I think it was sheer desperation that got me thinking about working for myself. "If no one wants me, what else am I to do?" (Please say that in a mournful voice filled with self-pity.) Becoming a capitalist-pig-dog was the hardest philosophical transition I ever made. In the process, there were many months of self-pitying, grieving over how "the system" had failed me. Wasn't "the system" designed to help "sick" and "disabled" misanthropes such as myself? "Boo-hoo."

In the end, I made the mental adjustment and something wonderful happened. In the past, I had these personal qualities that kept getting me into trouble in school. I tended to ask difficult questions. I had a bad habit of trying to think things through for myself instead of accepting explanations from my betters. These qualities that irritated my instructors transformed into major assets in a new environment. Questioning and curiosity was a major benefit in business! A willingness to think for myself and not ask the experts actually gave me a competitive advantage! "Wow!"

As a capitalist-pig-dog, if I want to make more money I have to cut expenses, increase productivity, or both. Cutting expenses is a constant battle. Most capitalist-pig-dogs are always on the watch for ways to lower costs. This practice gives us the reputation for being stingy or, worse, greedy. And some of us are!

Another way to make more money is to increase productivity, which usually involves creative innovation or streamlining business systems. Again, curiosity and creativity is rewarded in business. The ability to think out-of-the-box and not accept the words of experts can make you into a multi-millionaire. Regardless of whether you make a killing in marketplace, being a capitalist-pig-dog is likely the freest life out there.

Freedom and liberty is the reason why I love being a capitalist-pig-dog. I am free to say anything I want because my reputation is already ruined! 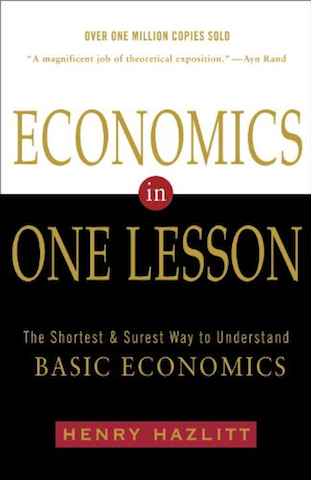 GO BOX Storage has donated this book to the Kamloops Public Library.

If you like Dr Thomas Woods' lecture and would like to learn more, Economics in One Lesson is a great book. Dr Thomas Woods' book Meltdown is available at the Kamloops Public Library. It's easy to figure out why I never learned this type of information in school.

"The "private sector" of the economy is, in fact, the voluntary sector; and... the "public sector" is, in fact, the coercive sector. The voluntary sector is made up of goods and services for which people voluntarily spend the money they have earned. The coercive sector is made up of goods and services that are provided regardless of the wishes of the individual, out of the taxes that are seized from him. And as this sector grows at the expense of the voluntary sector, we come to the essence of the welfare state."
Man Vs the Welfare State by Henry Hazlitt